The Ironhill Foundation was created in 2015, with a $150,000 donation, in memory of Irene Hill (Ron Hill’s late wife). Irene was an avid horse woman and competitor, initially with her horse Eastwood, in 3-day Eventing, followed by her pursuits in the Show Jumping ring. She then gravitated to the sport of Dressage with her next horses, Webster followed by Monty. Irene lost her battle with breast cancer in December 2010 and Monty passed in 2014. Irene had been tireless in her efforts to help her chosen horse sports grow and flourish. Foundation moneys will be managed on an annual basis through the Alberta Equestrian Federation as a Donor Advised Fund administered by the Raymond James Canada Foundation. We have requested that the charity funding equally target rider and trainer development in the jumping and dressage disciplines; as those were Irene’s passion at different points in her life. 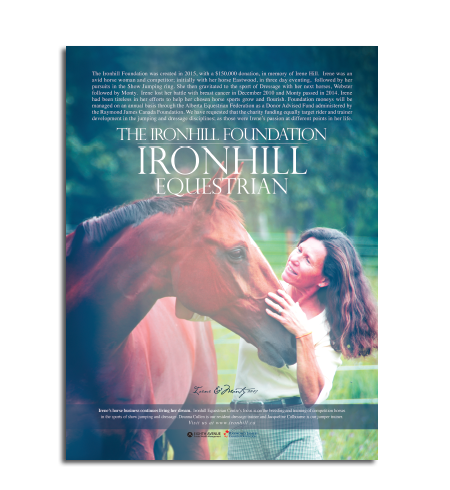 Ironhill is committed to supporting the development of equestrian talent, specifically within the Alberta region. We are proud to partner with the below associations, to aid in fostering further involvement, and support, of our sport throughout Western Canada, and across the country.